Catholic Church gets another snub from Irish Government 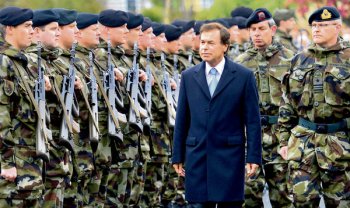 As further evidence of the secularising direction of Ireland and its downgrading of the influence of the Catholic Church, the Defence Minister, Alan Shatter (pictured right), recently refused to allow the army to provide a "guard of honour" for a procession during the Vatican's International Eucharistic Congress in Dublin. Members of the armed forces have previously been familiar participants in religious events.

The Catholic Church is said to be shocked and affronted by the refusal. It is not used to being told "no" by the Irish Government, which has traditionally been heavily influenced by the demands of the "Holy See". Church representatives are now saying that the development is motivated by "blind prejudice".

An army spokesperson was quoted in this week's edition of The Irish Catholic newspaper as saying: "The department was not in a position to approve such involvement as military participation was not considered appropriate."

The last major Catholic event in which the Defence Forces took part was in 2001 when the supposed "relics" of St Thérèse of Lisieux came to Ireland.

Members of the Defence Forces provided full military honours on a number of ceremonial occasions.

The Irish Catholic said: "The unprecedented move has raised fears that religious events around the country, where members of the Defence Forces have traditionally played an important role, will become 'no-go' events for military personnel. It will also increase suspicion among people of faith that the Coalition is increasingly hostile towards Catholics."

Terry Sanderson, President of the National Secular Society, said: "Why should the armed forces be seen as being at the beck and call of the Catholic Church? It is important for all public servants to be seen as neutral in religious matters, and that is particularly so for the army. Ireland is a multicultural society now and must no longer be seen as a 'Catholic' country where everyone who is not a Catholic is less important. Having released the stranglehold of the Church, the Irish people should continue with the process of secularising the country."

See also: My Irishness is not defined by any religion or language