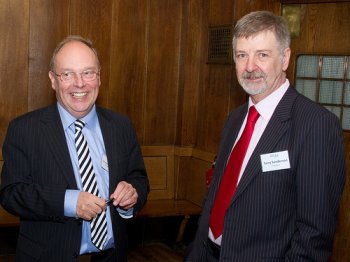 NSS President Terry Sanderson, and Executive Director Keith Porteous Wood, both argued the case that 'This House believes bishops have no place in Government' in a formal debate at Durham Union Society.

Terry Sanderson described as "self-serving tosh" the claim that bishops are in close touch with their communities:

"If you asked a representative sample of people throughout this nation to name their bishop, I predict that about 99% of them would have no idea. Most of them would probably not even know that they had a bishop let alone that they regarded him as playing any part in their lives whatsoever."

He pointed to the wider implications of having religious people in seats of power:

"The Bishops' Bench in the House of Lords represents an age of clerical power that has long past. It makes our parliament look quaint rather than modern. But in an age of increasing religious tension, it is important that our nation is seen to be fair to all and not to favour any particular religion or denomination."

And finished by saying:

"The bishops have no business in parliament and - one day, hopefully before too long - a forward-thinking government will be elected that will have the backbone to put the matter right."

Keith addressed some of the more practical problems associated with bishops having a place in Government. He described an early encounter with "episcopal power in the House of Lords in the late 90s with the passage of the Human Rights Bill, as it then was. I was shocked at the weeks and months of pressure the Church was applying to get itself completely exempted."

This was soon followed by, "one of the worst examples of Parliamentary abuse I have seen: pro-religious discriminatory provisions being inserted by the bishops into the School Standards and Framework Act 1998. By the time the bishops had finished...it had become a bigots' charter, allowing lesser skilled teachers to be selected over more able colleagues, simply on the basis of what they believed, or at least said they believed. The churches were given power to dismiss teachers against the will of the local education authority who were bearing all the salaries."

All of this legislation then put the UK in direct conflict with the European Union's efforts to eliminate discrimination at work. With the backing of Tony Blair, the Archbishops' Council wielded their power to secure significant exemptions for the Church, even though, "the European Commission – who we lodged a complaint with - itself concluded in a Reasoned Opinion (a formal warning) that the passages inserted by the Archbishops' Council were in breach of the Directive."

"So do not tell me that the bishops do not have power; power they used on this occasion which brought shame on the Houses of Parliament. Such was their bigotry - and worse, their blatant disregard of our treaty obligations to the European Union."