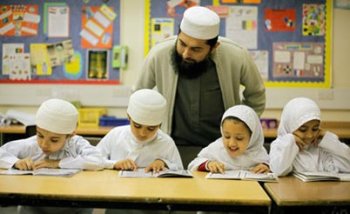 The Department of Education is consulting on new rules for private schools that seek to ensure they promote "British values" and discourage extremism.

It is thought that the tightening of the rules is aimed at the more than 100 independent Muslim schools, some of which were found to be promoting "anti-Western values" in a 2009 report by the think tank Civitas.

The new rules would ensure schools respect the criminal and civil law, present political issues in a balanced way and promote tolerance of other faiths.

The consultation document into the plans suggests that schools should "enable pupils to distinguish right from wrong and to respect the civil and criminal law", while providing children with a "broad general knowledge of public institutions and services in England".

Schools will also be expected to "preclude the promotion of partisan political views" and ensure that children "respect fundamental British values including democracy, the rule of law, individual liberty and mutual respect, and tolerance of those with different faiths and beliefs".

The new regulations represent a tightening of existing rules, which merely require independent schools to respect "the law", encourage pupils to contribute towards community life and tolerate different cultures. It will be used by Ofsted and other official watchdogs during inspections of independent schools.

The report said the changes would "help ensure that extremism, intolerance and teaching that undermines democracy and the rule of law are challenged within independent schools. Inspectorates will in future be better able to identify and report on extremism if these changes are made," it added.

Terry Sanderson, President of the National Secular Society, said: "We have been calling for some time for a code to control what is being taught in these private Islamic schools. There is plenty of evidence to show that too much time is spent on religion and the promotion of separatist ideas. If the children in these schools are to be integrated citizens of this country they cannot be kept in the dark about the values that underpin our society."