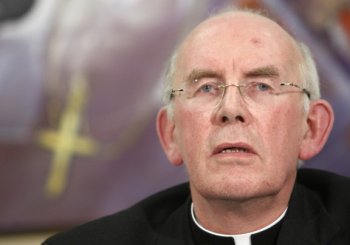 The National Secular Society has called on the Northern Ireland Justice Minister to launch an investigation into child abuse in the Catholic Church.

The NSS wrote to Justice Minister David Ford following a serious allegation made in the BBC's This World programme that a church inquiry in 1975 involving Brady, then a priest, was given the names and addresses of children abused by a serial paedophile priest. The programme claimed that this information was then not passed on to the families or the police, allowing the abuse to continue for at least another decade.

As a number of Catholic dioceses straddle the border, this is an issue that involves Northern Ireland too. In 2011 the NSS wrote to the Police Ombudsman for Northern Ireland urging him to consider an all-Ireland investigation. That request was ignored but the National Secular Society says it now hopes the Justice Minister will take the necessary steps to ensure that individuals within the Catholic Church are not permitted to evade the law which others are expected to follow.

In the letter to the Justice Minister, the National Secular Society said:

"The Criminal Law Act (NI) 1967 makes clear that it is the duty of anyone aware of a criminal offence having been committed to inform the police. We therefore call on you to investigate whether Cardinal Brady – or anyone else in the church – broke the law by withholding the knowledge of crime from the police in Northern Ireland."

However, Police Service of Northern Ireland (PSNI) Assistant Chief Constable George Hamilton said there would be no knee-jerk decision on whether to launch a police investigation.

Mr Hamilton did however confirm that the offence of withholding information from the police was on the statute in Northern Ireland in 1975 but said it had not yet been established whether the BBC documentary provided prima facie evidence the law had been broken.

He said officers would "do the right thing" based on where the evidence led them.

Keith Porteous Wood, Executive Director of the National Secular Society commented: "Brady not feeling any need to resign, or the Church any need to sack or even suspend him, are the actions that speak louder than words. Such a response confirms that the Curia right up to the Pope himself continues to consider the Church to be beyond the law for its officials' criminal actions, however heinous or widespread.

"The time has come for governments and international organisations, including the UN Committee on the Rights of the Child and the International Criminal Court, to apply pressure on the Vatican to release all the incriminating evidence it holds to justice agencies in the relevant countries.

"We include in this the UK Government, who should have raised this on behalf of the thousands of abuse survivors when Baroness Warsi visited the Vatican earlier this year. Victims of abuse are being abused again by the Church in denying them justice."