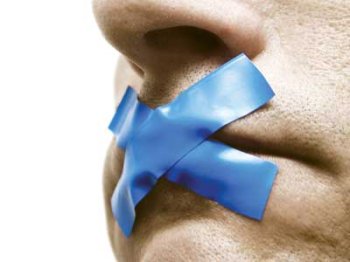 The National Secular Society has joined together with human rights campaigners and religious groups to launch a major new campaign to reform the 1986 Public Order Act, after mounting evidence suggests it is strangling free speech.

Currently, Section 5 of the Act outlaws "insulting words or behaviour", but what exactly constitutes "insulting" is unclear and has resulted in many controversial police arrests. In 2008 a sixteen-year old boy was arrested for peacefully holding a placard that read "Scientology is a dangerous cult".

In an unlikely move, The NSS has teamed up with The Christian Institute to launch the "Reform Section 5" campaign, as both organisations are committed to free speech and open debate. The campaign will officially launch at the House of Commons today.

It is hoped that the new campaign will increase the pressure on Home Secretary Theresa May to amend the law to remove the "insulting words or behaviour" phrase from Section 5 on the grounds that it restricts free speech and penalises campaigners, protesters and preachers.

A recent ComRes poll commissioned by the Reform Section 5 campaign shows that 62% of MPs believe it should not be the business of government to outlaw "insults." Only 17% of MPs believe that removing the contentious "insult" clause would undermine the ability of the police to protect the public.

David Davis, the former Shadow Home Secretary, is leading the cross-party calls for reform. Mr Davis, a strong supporter of civil liberties, says the campaign is "vital to protecting freedom of expression in Britain today."

The MP denounced "dangerous" restrictions on free speech, citing the 2005 incident of an Oxford student being arrested for saying to a policeman, "Excuse me, do you realise your horse is gay?" The Thames Valley Police justified the arrest on the grounds that the student had made "homophobic comments that were deemed offensive to people passing by."

Keith Porteous Wood, of the National Secular Society, said "freedom of expression should be used responsibly, yet some people only regard as 'responsible' that which they don't regard as offensive or insulting. Freedom only to say only what others find acceptable is no freedom at all.

"Secularists, in defending free expression, must ensure that the law is fair to everybody and argue equally for the right of religious and non-religious people to freely criticise and exchange opinions without fear of the law - unless they are inciting violence. Free speech is not free if it is available only to some and not others."

Simon Calvert of the Christian Institute said: "Churches around the world find themselves in constant friction with aspects of the cultures in which they live, so free speech is vital to us all.

"Britain's historic civil liberties were often hammered out amidst controversy over freedom to preach without state interference. Christians know first hand why free speech is precious and this is why The Christian Institute is pleased to join people across the political and philosophical spectrum to help bring about this simple but important change.

"By bringing together an unlikely alliance of groups, this campaign demonstrates that speaking out plainly for principle, and firm, even energetic, disagreement, are not inconsistent with civil discourse and democracy - actually they are the lifeblood of it."

Influential think-tanks and campaign groups including Big Brother Watch, The Freedom Association and The Peter Tatchell Foundation have joined The Christian Institute and The National Secular Society in the campaign to reform Section 5 in favour of freedom of speech.

Peter Tatchell, Director of the Peter Tatchell Foundation and prominent gay rights advocate, commented that "section 5 of the Public Order Act 1986 is a menace to free speech and the right to protest". He added that "the open exchange of ideas – including unpalatable, even offensive, ideas – is a hallmark of a free and democratic society."

Mr. Tatchell has previously fallen victim to the Section 5 himself. When campaigning against members of the extremist group Hizb ut-Tahrir - who called for the killing of gay people, Jews and unchaste women - he was arrested for displaying a placard that cited the murderous actions of Islamist fanatics. It was deemed "insulting" by the police.

The campaign is keen to stress that the law rightly protects the public against unjust discrimination, incitement and violence – but that the law does not need to protect us from having our feelings hurt.