Has Michael Gove already made up his mind about Catholic political agitation in state schools? 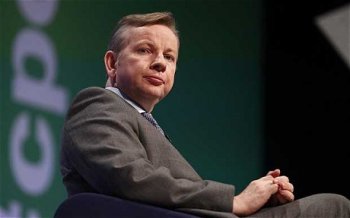 Damian Thompson, high profile Catholic and editor of the Daily Telegraph's blog section, accidentally tweeted over the weekend that he was told it would be OK for Catholic schools to oppose same-sex marriage at a dinner party attended by Education Secretary Michael Gove. The message read:

As reported by Pink News, when he realised his mistake, he deleted it. He had intended the tweet only for the Scottish composer James McMillan, but accidentally sent it out to his 8,600 followers.

Mr Thompson told Pink News the tweet in no way pre-empted the outcome of the Department for Education's investigation, which he was not aware of when he attended the dinner. He added that there had been no discussion of the investigation or of the promotion of marriage as a political view in Catholic schools. Instead, he had told the guests that in his view, Catholic schools should be able to teach their doctrinal view of marriage as being between a man and a woman exclusively, a view with which Mr Gove agreed.

Last month it was revealed that the Catholic Education Service had written to Catholic secondary schools across England and Wales asking them to promote the Coalition for Marriage's anti-gay marriage petition. The Welsh government was first to launch an investigation into whether schools may have broken the law. The Department for Education subsequently announced its own investigation, which is on-going. The Welsh education minister wrote to Catholic schools telling them that had they followed the Catholic Education Service's letter, they may have broken laws on political partisanship by promoting a one-sided view of a political issue.

Sections 406-7 of the Education Act 1996 forbid 'the promotion of partisan political views in the teaching of any subject in the school', and requires balanced treatment of political issues as they are taught.

The Welsh Minister for Education and Skills, Leighton Andrews, told Catholic schools this month that if they promoted the Coalition for Marriage, they would have to now promote the view in favour of equal marriage. He said the petition related "to political matters generally as [it] is seeking to persuade people to lobby the Westminster Government to prevent a change in the law [...] I trust you will ensure that if your pupils have been made aware of this correspondence they will also be made aware of the converse view in order to give them a balanced perspective."

Terry Sanderson, President of the National Secular Society, said: "It will be very interesting to see the official outcome of this Government enquiry into the Catholic Education Service's political agitation in state schools. We'll see whether Damian Thompson's excuse-making is true or whether Michael Gove will simply impose his own views on the matter, as his colleague Eric Pickles did on council prayers."