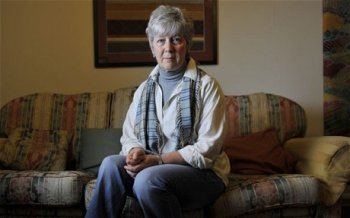 A Christian psychotherapist has lost her appeal against suspension from her professional body after being struck off after attempting to convert a homosexual man to heterosexuality.

In 2009, campaigning journalist Patrick Strudwick used hidden tape recorders to catch Christian therapist Lesley Pilkington, who believes that homosexuality is sinful, offering to "cure" him using methods that have been condemned as dangerous. His report of his experiences was published in The Independent.

A hearing carried out by the British Association of Counsellors and Psychotherapists (BACP) in 2011, ruled that Mrs Pilkington had fallen short of professional standards by making "premature and reckless" diagnoses.

An appeal panel this week found that she had failed to take enough steps to ensure that Mr Strudwick fully understood what her counselling entailed and the "precise belief system that underpinned it". However, the appeal panel ruled that the controversial therapy itself did not necessarily breach professional standards.

Reacting to her unsuccessful appeal, Mrs Pilkington told The Telegraph that counsellors with traditional views now face being "closed down".

Andrea Williams, director of the Christian Legal Centre, which supported Mrs Pilkington said: "People who practise reparative therapy are increasingly pushed out of the public sphere.

However, as counselling and psychotherapy is unregulated in the UK, Mrs Pilkington is still free to offer such services, but can no longer claim senior accredited status of the BACP.

Last week one of the most influential figures in modern psychiatry apologised for a scientific study which supported attempts to "cure" people of their homosexuality. Dr Robert Spitzer said his study, hailed by religious groups as proof that gay people could successfully become straight if they were motivated to do so, was "fatally flawed".

Patrick Strudwick commented: "I am delighted that the BACP has upheld their original decision. Mrs Pilkington's therapeutic practices have been held up to scrutiny and found to be fundamentally flawed.

"This case sets a vital precedent. I urge anyone involved in this harmful practice to take note of this case and desist. Love needs no cure."