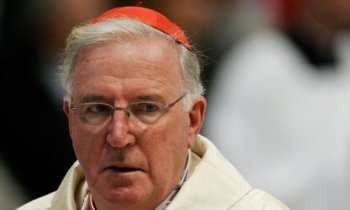 In an address at Leicester's Anglican Cathedral, the former leader of Catholics in England and Wales, Cardinal Cormac Murphy O'Connor, said that "secular values" were behind the violence carried out in totalitarian states and some of the 20th century conflicts that have killed millions.

"Our danger in Britain today is that so-called western reason claims that it alone has recognised what is right and thus claims totality that is inimical to freedom," he said. "No one is forced to be a Christian. But no one should be forced to live according to the new secular religion as if it alone were definitive and obligatory for all humankind."

He said: "The propaganda of secularism and its high priests want us to believe that religion is dangerous for our health. It suits them to have no opposition to their vision of a brave new world, the world which they see as somehow governed only by people like themselves. They conveniently forget that secularism itself does not guarantee freedom, rationality ... or violence. Indeed, in the last century, most violence was perpetrated by secular states on their own people."

He said a loss of "reverence" for humanity meant that some of the most vulnerable people in society are now routinely viewed as a "problem" or "threat".

Terry Sanderson, president of theNational Secular Society, said: "Cardinal Murphy O'Connor is simply echoing the Vatican's familiar and untrue line that 'secularism' is the enemy of religion. It is certainly the enemy of power-seeking religion, as with the Vatican's present version of Catholicism, but it upholds the rights of religious believers to practise their faith freely and without hindrance. His presentation of Christianity as being under attack is a familiar one and still completely unconvincing. It is part of a wider campaign to reassert Catholic influence."

"But we should never forget that Mr Murphy O'Connor himself was guilty of disgracefully covering up some of the most horrific crimes of a paedophile priest when he was Archbishop of Arundel and Brighton – allowing the perpetrator to continue abusing children in other parishes. Why Murphy O'Connor was never brought to justice over this remains a mystery."

See here for details and here.

See also: George Pitcher says the NSS is guilty as charged – but it's not clear what the crime is