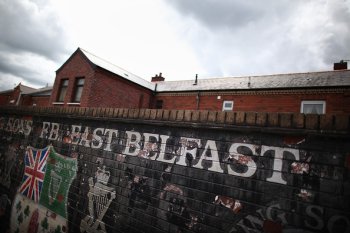 A survey of Northern Ireland's teenagers shows that religious and ethnic barriers are being gradually broken down, but another survey in the workplace shows that there is still a long way to go as sectarianism there is still rife.

The survey of 1,434 16-year-olds carried out by Queen's University and the University of Ulster reveals that just one in five (22%) has no friends from the other main tradition compared to one in three (33%) in 2003, when the annual study was first carried out.

Young people are also socialising more with those of a different ethnic background. Almost half (48%) quizzed in 2006 said that all their friends were of the same race or ethnic group compared to just 26% today.

This year's version of the annual survey includes the first set of respondents born after the 1994 ceasefires and gives an insight into the lives of 16-year-olds across Northern Ireland. The authors of the report 'No More Them And Us?' said:

"The evidence suggests that 16-year-olds increasingly have contact across both the religious and ethnic divides. Only a minority of young people report having no friends from other backgrounds. This reflects an important change since 2003. The comments made by young people suggest that whether someone is like 'us' or 'them' is not purely based on religion and that friendship patterns are wider than ever before, encompassing both religious and ethnic diversity."

•66% of 16-year-olds very often or sometimes socialise or play sport with someone from a different religious background compared to 52% in 2003;

•6% of Protestants are unfavourable towards the Catholic community, down from 11% in 2003;

•6% of Catholic are unfavourable towards the Protestant community, down from 9% in 2003.

Researchers also noted that pupils at an integrated school were most likely (60%) to say they very often socialised or played sport with people from a different religious community compared with 39% of those attending a grammar school and 29% a secondary school.

In 2011, only 6% of those attending an integrated school said they had no friends from the other main religious community compared to 21% for secondary school pupils and 24% of grammar.

The report's authors added: "Of course, some of these cross-community activities may be school-based and not necessarily the choice of the respondent."

Meanwhile, a new report carried out by trades unions shows that sectarianism is still rife in many work situations in Ulster. Read more here.