Kuwait must not impose death penalty for blasphemy, says Amnesty 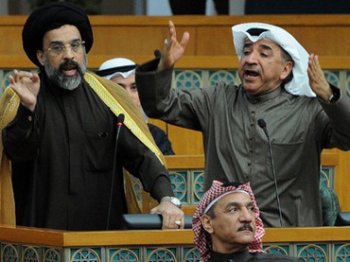 A proposed legal amendment that would make blasphemy a crime punishable by death in Kuwait would be a massive step backwards by the country's authorities, if passed by parliament, Amnesty International have said.

The draft law was quickly introduced and passed by the Kuwaiti Parliament's Law and Legal Affairs Committee following the arrest of a man accused of insulting the Prophet Muhammad on Twitter.

Hamad al-Naqi, a member of Kuwait's Shi'a Muslim minority, is being held in pre-trial detention charged with "defaming the Prophet" in tweets posted last month. He has denied making the posts, saying that somebody hacked into his Twitter account.

Kuwait's parliament voted in favour of the amendment on 12 April. Before it is passed, the amendment must go to a second vote two weeks after the first and then be approved by the government andKuwait's ruler Sheikh Sabah al-Ahmad al-Sabah.

"All eyes are on Kuwait's recently-elected legislators. They must immediately scrap any plans to introduce the death penalty for blasphemy."

Article 111 of the Penal Code prohibits defamation of religion, currently providing for up to one year's imprisonment and a fine.

Under international law, "religious" offences do not fall under the category of "most serious crimes", the minimum threshold prescribed for crimes carrying the death penalty.

In November 2011, the United Nations Human Rights Committee called on Kuwait to "revise its legislation on blasphemy and related laws […] to ensure their strict compliance with the [International Covenant on Civil and Political Rights, or ICCPR]" to which Kuwaitis a state party.

Article 15 of the ICCPR prohibits states from imposing a heavier penalty than the one applicable at the time an alleged offence was committed.

"If it emerges that Hamad al-Naqi's Twitter account was indeed hacked then he has no case to answer; otherwise he is being held solely for exercising his right to freedom of expression and, unless charged with an internationally recognizable offence, he must be released immediately," said Ann Harrison.

"On no account should he be sentenced to death."