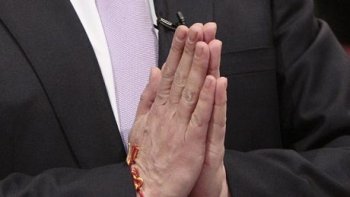 A Muslim councillor in Reigate in Surrey claims he has been deselected by the local Conservative Party after he objected to the saying of Christian prayers as part of the Council meeting.

Imran Khan has represented Horley West on Reigate and Banstead Borough Council for four years but has not been selected to stand when one third of the council's seats are contested on 3 May.

He told the local Surrey Mirror newspaper: "Many of the councillors had mistakenly thought I was objecting to the notion of prayers before council which wasn't true – I was simply recommending a break between the two. However, once people get themselves worked up about something and feel upset about something they are not too open to any debate about it. I think they were all feeling pretty upset about the position I had taken."

His previous requests for the prayers to be concluded before the official start had been "totally shot down" by fellow members, he said. "Why should I be forced to stand outside during council meetings? It's not that anyone has told me to stand outside like a naughty boy but it is that, in asking me to do something which I cannot do, which is to be a part of Christian prayer, they are excluding me from what is the council business."

Mr Khan said that he thought the NSS's victory at the High Court had been "a victory for everyone who believes in local democracy and religious freedom. I think no-one should be disadvantaged because of their religion, or lack of religion, from participating in local democracy. My argument is a secular one. I believe religion has no place in politics."

Meanwhile, Dorchester Town Council in Dorset has approved a motion to abolish prayers from its meetings and not replace them with any other religious observance. The council also voted to scrap the role of mayor's chaplain.

Councillor Richard Biggs argued that there was no place for prayers and religious ceremony at council meetings in modern times. He told the Dorset Echo: "I don't think there is any place now – this is not a place of worship. In this day and age I'm not sure it's the place to have formal prayers. I think it's embarrassing for a lot of people and awkward."

Councillor Robin Potter added: "I think the town council should be a secular body."

There was also support for the move from Councillor Andy Canning, who was announced at the meeting as the mayor for the next mayoral year. He said: "Surely in this day and age faith is about personal individual conscience. In our modern society we are not about imposing our views on other people."

The recommendation was voted through with ten councillors voting for to four against, but an amendment was added to state that the mayor would use appropriate words to set the scene at the beginning of the meeting.

Stoke-on-Trent City Council has decided that it will move its prayer session to 15 minutes before full council meetings.

Labour councillor Gwen Hassall put forward the motion, saying: "I want to continue with the prayers and a number of people do, but you've got to show respect to the people who find it uncomfortable. There are people who have religious differences and some are secular too.

"By doing it this way we are not offending anybody and it saves people coming to prayers who don't want to. I would hope everybody will still join in, but we shouldn't force that, just as I don't want people to stop me from taking part."

Reverend David Bickersteth, of St Peter's Church, in Blythe Bridge, said: "Making people say prayers like an old fashioned school assembly can sometimes do more harm than good and isn't very worshipful. A separate advance prayer will mean people don't feel like they have to be there.

"The Christian faith is being eroded in society all the time, but it has got to be something people want to do. You can't bulldoze people into faith."

Penkridge Parish Council in Staffordshire has decided to move prayers off the agenda so that they are said before the meeting opens. Councillor Sandra Chambers, who put forward the motion to ban prayers altogether, told a meeting of the council: "I heard councillors be disrespectful to other councillors who chose to leave the room during prayers, and I don't like that. People's beliefs should not be open to speculation, and it does put councillors on the spot. I believe that everyone who lives in Penkridge should feel represented. Our practices should not create division of any kind."

Councillor John McPheat said: "It seems to me that if councillors wish to hold prayers, they should be held before the meeting starts. I would have thought we should have them prior to the agenda being taken up. I stand because I respect the opinion of those who want prayers but I don't take part, and I choose not to involve myself."

In what the local paper described as a "bizarre" debate, Cornwall Council decided to reinstate prayers to the formal agenda of its meetings after they had been removed for two meetings. A proposal to permit faiths other than Christianity to have a look-in was rejected.

The debate was opened by a statement from Councillor David Biggs, who was opposed to having prayers as part of the formal agenda, saying he felt the council should not be "influenced by superstition". He argued prayers had no place in the council chamber and said there was also no need for them before meetings.

Councillor Morwenna Williams made a strong proclamation of her Christian beliefs and declared she believed that "the Devil is alive and at work here in this county".

The council also agreed members and officers could choose whether to take part in the prayers inside the chamber or to wait outside.

Gary Selwyn a councillor on Cotswold District Council said religion should not play a part in local authority work and called for a "pledge" instead. He spoke out after the vicar of Cirencester, the Rev Canon Leonard Doolan, had prayed for the council and others. In a written question to council chairman Carolyn Nicolle, Mr Selwyn (LD, Cirencester- Watermoor) said: "Wouldn't the work done in this chamber be conducted just as effectively, and be more open, embracing and respectful of people's backgrounds and chosen beliefs, were a pledge to be adopted, rather than a prayer?" Rev Canon Doolan said "prayer is in everybody's interest."

Councillor Gail Marchant-Daisley, who represents Petersfield for Labour, had asked for prayers to be replaced with a minute of reflection. After the meeting, she said: "This isn't about bashing Christians or anyone else. It's that the saying of prayers of any denomination at the start of council meetings is inconsistent with the council's policy on equality and potentially excludes people of other faith or none.

Councillor Nimmo-Smith said: "I find that having a brief moment of reflection brings solemnity to the relatively few occasions when the full council is gathered together, and I think that something that has had a long history does have a place.

"But I'm open to how other councillors feel and whatever we do shouldn't bind the hands of future mayors."

Cambridge City Council has launched a review into whether prayers should continue or whether they should be dropped.

Atheist Councillor Colin Rosenstiel of the Market ward of Cambridge City Council said the religious elements of the role was a factor in why he had never wanted to be mayor, despite having been first elected in 1973. But Councillor Rosenstiel added: "I actually believe fairly strongly that the present arrangements should continue, despite being an atheist – it's a thing for the serving mayor. Those of us whose family backgrounds aren't from this country have to have some respect for the long Christian tradition in this country."

Louth Town Council in Lincolnshire has decided to hold prayers before the meeting starts until the matter can be properly discussed.

Ludlow Town Council in Shropshire will hold prayers before the meeting opens.

Lyme Regis Council in Devon has moved prayers to 15 minutes before the start of the council meeting.

Market Rasen Council in Lincolnshire will have prayers before official business commences.

Gedling Borough Council in Nottinghamshire is keeping prayers on the agenda according to one resident there who has contacted us.

Ryedale District Council in Yorkshire defied the law and continues to include prayers on its agenda, causing two councillors to walk out in protest. Liberal councillors Tommy Woodward and Luke Richardson waited outside the council chamber at Ryedale House until the chaplain had finished. Councillor Woodward said later: "I am neither prepared to be a hypocrite nor a law breaker and so took it upon myself to leave the chamber."