All but one of the leading future mayoral hopefuls in London declared or implied that they had no religious faith at a meeting of Christians last week. The odd one out was Liberal Democrat candidate Brian Paddick who said he was a Christian.

Nevertheless, present mayoral incumbent Boris Johnson told the hustings at St James' Church that a "secularist agenda was at risk of bringing about perverse results" in society.

He said that British Airways had been wrong to "ban" Nadia Eweida from wearing a cross (which it didn't – it simply asked her to wear it under her uniform). He said he had met Ms Eweida on the tube by chance and after listening to her story (which we're sure was told utterly objectively) thought that BA were "completely over-egging it" for "banning her wearing of a cross".

Mr Johnson, who is seeking a second term as Mayor at elections on 3 May, said he also disapproved of the NSS's attempt to remove prayers from the formal business of local councils. He said it was "completely wrong" and an attempt to rid the country of its heritage.

During the hustings — organised by the ecumenical London Churches Group and the Evangelical Alliance — both Mr Johnson and Ken Livingstone, the Labour candidate, pledged to make it easier for new churches to be built in London by amending planning laws.

When challenged on his banning of an advertisement from a Christian group that claimed gay people could be cured by prayer, Mr Johnson said he had done the right thing because ultimately the advertisement would have reflected badly on Christians.

Ken Livingstone — one of Mr Johnson's opponents — supported this, saying Boris had made the right decision. Mr Livingstone also said that although he wasn't a believer he had "toned down" the "militant atheism" of his youth.

When challenged on recent reports of him saying London should become "a beacon of Islam" Mr Livingstone denied making the remark.

Other questions mainly concerned gay marriage (which all agreed with), gambling, housing and other social issues.

One audience member asked the panel whether they had the Fear of God or the Fear of Man in their hearts – to which Mr Johnson replied his fear of men or God was far overshadowed by the fear of his wife.

Brian Paddick, the Liberal Democrat candidate, explained that he was a committed Christian and should he win he pledged to be the "servant of London". All of the candidates on the platform — which also included Jenny Jones for the Green party — praised churches for their work in the city.

Terry Sanderson, President of the National Secular Society, said: "We have to take into account that in election times politicians will promise anybody anything to get their vote, but it was a shame to see Boris Johnson encouraging Christians in their misguided belief that crosses are 'banned' from the workplace. It is about time politicians realised that most Christians, like everyone else, vote according to the wider issues, not according to their religion. The activists present at these hustings are unlikely to be representative of London's Christians." 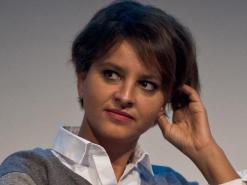 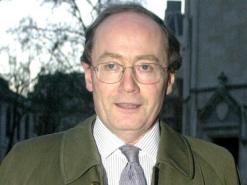 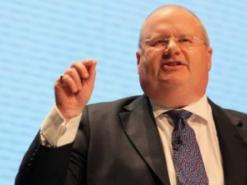 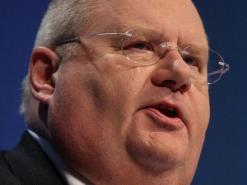 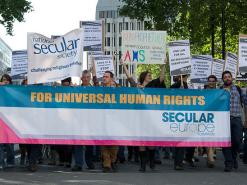