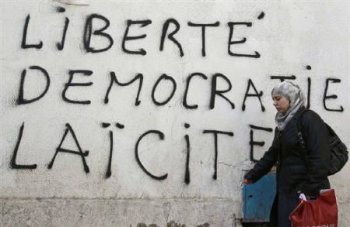 Tunisia's ruling Islamist Ennahda Party has ruled that the country will remain constitutionally secular and sharia will not form the basis of law.

Ziad Doulatli, a party leader, said the first article of the new constitution would remain the same as in the 1959 version and it will not call for sharia to be the source of all legislation as many conservatives had wanted. Article I of Tunisia's constitution states that "Tunisia is a free, sovereign and independent state, whose religion is Islam, language is Arabic and has a republican regime."

The decision marks a break between the moderate Islamist Ennahda and an increasingly vocal minority of ultraconservative Muslims known as Salafis who have been demanding Islamic law in a country long known for its progressive traditions.

Last week 10,000 Islamist demonstrated in the streets of Tunis demanding sharia be enshrined in the constitution.

Ziad Doulatli said the decision would help the "democratic transition of the country" and could "serve as a model for other countries going through similar transformations".

Under more than 50 years of secular dictatorship,Tunisia stood out in the Arab world for its progressive laws, especially regarding the status of women. Many leftists and liberals feared this would be rolled back with the victory of an Islamist party at the polls.

Ennahda, however, has always pledged to maintain the character of the state and formed a coalition government with two secular parties.