Christians told: you don’t own the local crematorium 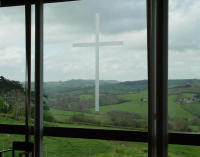 Christians are outraged that a window at a crematorium in Bath that is etched with a cross is to be removed and replaced with plain glass.

The window at Haycombe Crematorium, in Bath,Somerset, will be replaced as part of a £140,000 refit and a mobile cross will be made available for mourners if they want it.

Inevitably the decision has met with the usual cries of "Christianity is being sidelined".

The crematorium is constantly referred to in press reports as a "chapel", but, of course, it is not a consecrated space. It is not a church or a chapel, it is a public facility operated by the council for the benefit of the whole community.

A 100-signature petition from Christian campaigners will be presented to Bath and North East Somerset Council chief executive John Everitt, calling for a new cross to be installed in the window.

Council bosses stressed that the decision to remove the cross had been taken after consultation with funeral directors and local clergy. A spokesman maintained Haycombe should be a setting suitable for people of all faiths and religious beliefs.

He said: "Following consultation with local funeral directors, ministers and taking into account our own feedback from customers, the consensus was that the chapel should be a setting where all faiths, including those who are not religious at all, can adapt the surroundings to suit the wishes of their loved ones. In line with this consensus, the replacement window will be plain. The council's bereavement services team will discuss with all families and funeral directors ways to provide a suitable environment for any service. This could include providing removable crosses or any other symbol that a family feel is appropriate."

Terry Sanderson, president of the National Secular Society, said: "It amazes me that Christians have commandeered crematoria up and down the country and decorated them to give the impression that they are chapels (defined as 'a religious place of fellowship and worship') when, in fact, they are secular spaces. An increasing number of people want to have non-religious funerals and crematoria must be available to them, too, without creating the impression that they are in a church."

Mr Sanderson pointed out that for most their history the churches completely opposed cremation but when it was legalised they set about hijacking the buildings set up for the procedure.

The British media unquestioningly promulgates the false narrative of Christians being discriminated against in the workplace. Terry Sanderson looks at the latest case involving a Christian disciplined...