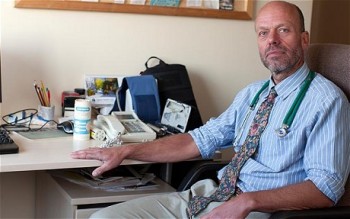 The doctor accused of trying to convert a patient to Christianity in a consultation is to face a new hearing by the General Medical Council in June, after the regulator ruled the patient can testify by phone.

At the initial hearing last year, the GMC legal team claimed Dr Scott had 'crossed the line' but he claimed he was the victim of 'anti-Christian bias' within the GMC. This hearing was adjourned because the patient concerned did not feel comfortable attending in person. He is believed to have mental health issues and will now be permitted to give evidence remotely.

Dr Scott is supported by the Christian Legal Centre. He also said his "own faith had more to offer than that of the patient" in media interviews about the case. He claims he has seen Jesus curing people and that "there is a place for Jesus in the surgery". He describes the 'faith approach' as 'an optional extra' but it is one that patients have to actively opt out of at his Margate practice run by six Christian GPs.

The GMC is very clear that doctors 'must not impose their beliefs on patients, or cause distress by the inappropriate or insensitive expression of religious, political or other beliefs or views.' It will start a consultation in April on possible changes to its personal beliefs and medical practice guidance, which explores how patients' and doctors' beliefs can have an impact on care.

We covered the original story in Newsline here.