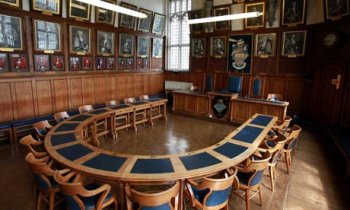 Bideford Town Council has decided not to appeal the High Court's decision that putting prayers on agendas is unlawful. It was at the centre of the NSS's challenge to prayers as part of council business.

Presumably as a result of an earlier decision by the Council to proceed with an appeal, the High Court had issued a formal notice of appeal that we received last week, together with an inch thick bundle of papers setting out the grounds. The solicitors withdrew their appeal last Friday.

The council has decided to obey the law and has removed prayers from the agenda. They are now said before the official meeting begins.

Former councillor Clive Bone, who fought against the prayers alongside the NSS, said he was happy the Council had decided not to appeal.

Keith Porteous Wood, Executive Director of the NSS, said: "The council's decision is the right one. No-one is stopping them praying – and indeed, we would uphold the right of those who wish to do so at the appropriate time but that time is not during council business.

"Communities Secretary Eric Pickles has issued a number of carefully worded statements that have been interpreted as claiming that he has over-ridden the High Court judgment with the Localism Act, but a careful reading of the statements does not say that. It is for the courts to interpret the law, not Government Ministers - particularly as there is no mention of prayers in the Localism Act, and it was not introduced with the purpose of making prayers during council meetings lawful."