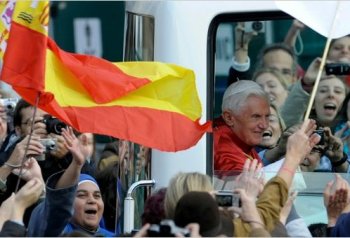 Spain's new right-wing government, headed by the People's Party, has announced that it will seek to reform the nation's abortion law, which permits abortion on demand during the first 14 weeks of pregnancy, and allows minors to obtain the procedure without parental permission.

According to Minister of Justice Alberto Ruiz-Gallardon, the previous legislation, enacted during the secularist Zapatero era, was approved "without consensus and with the unfavorable opinion of the agencies that were consulted."

But Senor Ruiz-Gallardon was unable to say how far the abortion laws would be rolled back – but Catholic anti-abortion groups are hopeful that there will be a major repeal of women's right to choose.

The news of the new initiative was greeted with glee bySpain's largest pro-life organization, Right to Life (Derecho a Vivir), which sees this as a step towards its (and theVatican's) ultimate goal of making abortion completely illegal.

The Coordinator of Right to Life, Gador Joya, says the new initiative is "good news" because "it seeks to restore parental authority, which is violated by the current law," wrote,. However, he added, "the proposal is still very vague, so we will be very attentive to what happens, because we are not renouncing our fundamental objective, which is the complete elimination of abortion."

See also: The forked tongues of the anti-choice campaigners