Establishment means the Queen does not belong equally to us all 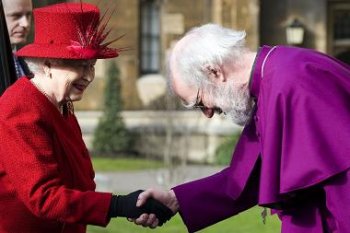 In a speech at Lambeth palace, the Queen told the Archbishop of Canterbury how inclusive the Church of England is and how important its establishment is to the nation.

She said "The concept of our established Church is occasionally misunderstood and, I believe, commonly under-appreciated. Its role is not to defend Anglicanism to the exclusion of other religions. Instead, the Church has a duty to protect the free practice of all faiths in this country. It certainly provides an identity and spiritual dimension for its own many adherents."

"The Queen has a strong religious faith. For her to express her enthusiasm for that faith among religious leaders is appropriate and I'm sure they appreciated it. But her depiction of the Church of England as inclusive is a little hard to swallow.

"In the past public office was reserved exclusively for communicants of the Established Church. The National Secular Society has been concerned since its foundation in 1866 about the lack of inclusiveness of the Anglican Church in England. On four occasions, our founding president, Charles Bradlaugh was elected to represent the people of Northampton but was each time refused permission to take the necessary oath to take his seat in Parliament because he was an atheist. That only changed because progressive campaigners and secularists pressed for a more inclusive society.

"In its history the Church of England has excluded Catholics, Jews, atheists – indeed, the Act of Settlement still forbids a Catholic to take the throne. So this rewriting of history is a bit disingenuous.

"In a vastly diverse society such as ours, it is unsustainable that this tiny denomination (less than a million people attend CofE services on the average Sunday) should have such extensive privileges.

"Yet, still today, the Church of England alone enjoys world-class privileges which are the very antithesis of inclusivity. Above all, it continues to enjoy representation in our legislature through its nomination of 26 bishops in the House of Lords. It is the only religious body in a western democracy to have such power. The bishops who sit in Parliament have real power, and exercise it. A quarter of publicly funded schools are under the control of the Church of England, far more than any other religious body. The entire running costs of these schools are paid for by the state, yet many of them exclude local children in favour of those from farther away whose families are, or claim to be, Christian.

"The Queen is regarded by many as a great unifier in Britain. But her position as both head of state and head of the Church of England sends the wrong message to the many, many people in this country who are not Christians – or who are not even the right kind of Christians.

"Prince Charles has already signalled that he intends to change the Coronation Oath so that he can be the defender of all faith rather than the defender of the faith (Anglicanism). So this will essentially cut the exclusive link between the monarchy and the Church of England. It also further alienate those without faith as being somehow unworthy. The best, indeed only, way to ensure inclusion for all is for there to be no religious promise in the accession oath. Although it is unlikely that the Queen would want to change the oath she made at her own coronation, it is clear that the days of the Church of England's privileged status are numbered.

"The Monarch should reign over a country of equals. That is certainly not what the establishment represents, and multi-faith establishment raises more problems than it solves."