Christian discrimination report is just another call for special privileges 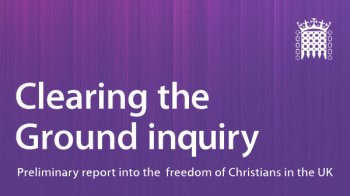 Last year, the evangelical Christian MP Gary Streeter set up what he called "an inquiry" into whether Christians are being 'marginalised' in the UK. It has now produced a report called Clearing the Ground jointly with the Evangelical Alliance UK.

Together with other like-minded MPs, he was concerned about the large number of court cases that were being brought by Christians claiming to be suffering discrimination because of their beliefs. None of these cases had been successful, adding to the perception that persecution was a reality.

In fact, the reason the cases were failing was because they were unreasonable and were claiming that Christians should have special rights in the workplace and in society at large. When these special rights were not granted by the courts, it was immediately claimed that "Christians have fewer rights than anybody else".

These determined and well-funded groups have brought to court one foolish case after another and after they were repeatedly kicked out, they have used their open access to newspapers such as the Daily Mail and the Daily Telegraph to claim persecution.

But that tactic is beginning to backfire on them. As the cases became sillier and sillier, people began to see what was happening. The latest example of an evangelical Christian working with disabled children for Merton Council who refused to work on Sunday made many people angry rather than sympathetic. The woman in question, Celestina Mba, was unreasonable, inflexible and fuelled by a righteousness that, to those outside her own little religious circle, appeared almost fanatical. The Employment Tribunal took only minutes to throw out her claims.

It seems that some Christians are now beginning to see that by overstating their case they are damaging it. The Clearing the Ground report says: "Some of the legal activity, associated campaigning and media coverage have been unwise and possibly counter-productive to the positive role that Christians play in society." It goes on:

"The actions of some campaign groups can discredit the Church in the UK and result in perceptions that Christians are seeking unfair exemptions. By bringing highly emotive cases to the fore, they also can add to the feeling among Christians that they are more marginalised than they actually are.

"On some occasions we perceive that campaigning becomes inflammatory or even counterproductive to Christian freedoms. This is due to factors such as: the strategically unwise selection of cases; a distorted presentation of facts for manipulation of the media; and most alarmingly, the deliberate misinforming of the church constituency in order to motivate support."

The report says that claiming religious persecution in the UK devalues the real persecution of Christians around the world.

All the same, the report still found there is a "legal and cultural problem" where courts have "created a hierarchy of rights" and companies, institutions and government "do not take sufficient action" to accommodate religious belief.

The committee of the inquiry took evidence from more than 50, almost entirely Christian, organisations.

Although it thinks that the court cases may have been a tactical mistake in the campaign to get special rights for Christians, it still concludes that Christians are entitled to special rights.

It highlights "fundamental problems" with the 2010 Equality Act, and "failures" of the Equality and Human Rights Commission (EHRC) to adequately represent or protect religion, while "privileging the rights of other groups".

It concludes: "The problems that Christians face are far from universal, but they do represent a trend towards a reduction in the space given to belief in public life. As a result this leads to an assumption that religious belief should be a private activity."

Mr Streeter, who chaired the inquiry, said: "Of course Christians should obey the law, but the law should reflect the positive contribution the Christian faith has made to the heritage of this country and also respect the sincerely held beliefs of mainstream Christians. Our report indicates how this delicate circle can be better squared."

Its recommendations include looking at the introduction of statutory guidelines for "reasonable accommodation" of religious belief among employers and services. The report also calls for more public education about religion, better guidance for local authorities and a shake-up of the EHRC.

Terry Sanderson, president of the National Secular Society, said: "This report is simply more self-serving and dishonest propaganda from Christians who are determined to overturn the equality and human rights legislation that stand in the way of their discriminating against other people. There should be no attempts to extend the concept of 'reasonable accommodation' which is already written into the employment protection laws. Extending it simply means providing another exemption for the religious to make life difficult for others – particularly gay people."

Mr Sanderson dismissed the report as little more than special pleading and a call for a change of tactics among evangelicals. Rather than taking silly court cases that backfire on the litigants, they appear now to be advocating an effort in parliament to overturn, or at least render ineffective, equality laws."