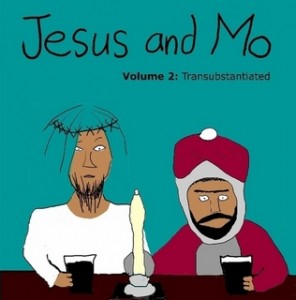 The Atheist Secular Humanist group at University College London (UCLASH) has been asked by the Students' Union to remove a cartoon of the Prophet Mohammed (part of the Jesus and Mo series) from one of their events posted on Facebook. The request was made after a complaint from a Muslim student who claimed that he was offended by the image that appeared to show the prophet with a pint of beer - alcohol is strictly forbidden to Muslims.

Speaking to the National Federation of Atheist, Humanist and Secular Student Societies (AHS), the UCLASH President said: "That student representatives of the country's first secular university should attempt such an act of censorship is disheartening. The Union officer [I have been speaking with] stated "I have spoken to other faith societies this year about their publicity and, for example, asked them to change it when it contravened UCL's equal opportunity statement" but she did not say we had contravened it ourselves."

The group's President was later invited to visit the Union and discuss the issue further. The NSS supported UCLASH in this issue and advised them before their meeting with the Union. The outcome of the meeting was that the Union have now agreed to meet with ACLASH in future to discuss any problems rather than banning any materials.

UCL was founded in 1826 as a secular alternative to the strictly religious universities of Oxford and Cambridge, despite strong opposition from the Church of England. It was the first higher education institution in England to accept students of any race or religious or political belief and was christened by Thomas Arnold 'that Godless institution in Gower Street'. It is therefore particularly important to support and defend the right to freedom of expression without religious interference and to make a clear distinction between illegal attacks on individuals because of their religion and 'offence' used as a means to stifle this freedom.

A spokesperson from the AHS commented "This is not the first time that an AHS member society has been caught up in a row over published material. In 2008, Warwick Atheists caused controversy with a poster showing religious symbols being put in a bin. Leeds and Southampton Atheists have both experienced intimidation when they proposed showing material that some Muslims took offence to."

There is a petition that you can sign to show support for the students here.