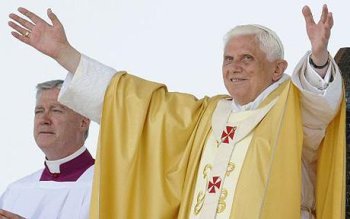 A priest in the Diocese of Westminster has begun a campaign for London to host the Vatican's World Youth Day in 2016. Fr Stephen Wang set up a Facebook group, "World Youth Day London 2016", to test whether there is popular interest in the idea.

He said that the English Church could "put forward a fantastic proposal" and that, after the event had been staged in Spain, France, Italy and Germany in recent years, "the United Kingdom is the next obvious one".

He added: "It wouldn't just be a London event but a national event, we could even include Ireland, all the different dioceses and cities doing all these amazing things. But there is nowhere like London, in terms of the space, the infrastructure, the transport, food outlets, the venues, the parks and commons, and we have this unusual situation of three dioceses converging on one city. It is the biggest youth event in the world and London would be the ideal city."

Terry Sanderson, president of the National Secular Society, said: "The last time the Pope came to this country, the resentment he sparked about the amount of public money wasted on the trip was immense. Despite the Church's attempts to talk up the 'success' of the visit, its own research showed that it was actually a dismal failure.

"If the Church decides to bring World Youth Day to Britain, it can expect big protests about any public money spent on such sectarian propaganda."

Mr Sanderson pointed out that World Youth Days in other parts of the world had cost states incredible amounts of money. "We will not accept that the event brings in large amounts of money in tourism revenue as the Church traditionally claims. The experience of other countries has been that tourists stay away to avoid such an event."

and how gay Catholics are excluded