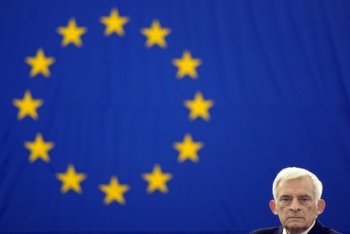 The President of the European Parliament, Jerzy Buzek, has launched a vicious attack on secularism during a European prayer breakfast.

Mr Buzek, the former Prime Minister of Poland, and a Protestant, said that Christianity is one of the greatest strengths Europe has, and if it is lost, "we will be condemned to the erosion of the European spirit".

Mr Buzek used his address to complain about what he described as "aggressive secularism", describing secularists as "an aggressive, and in reality intolerant, minority" that would like to "lock our faith in to the small box of our privacy." Such a move, he said "would mean to scrap the idea of religious freedom". Mr Buzek went on:

"History shows that the empty space left by the removed cross has always been conquered by totalitarian ideologies. The disappearance of the cross often resulted not in the release but the enslavement of man.

"I am convinced that we can not only save our faith, but through our attitude in a secularised world, we Christians can also be the salt of this earth and a light for everyone."

Terry Sanderson, President of the National Secular Society, said: "President Buzek is talking nonsense. Europehas had Christian values for 1,500 years, but they have not spared us from endless wars, many of them religious. Europeis thankfully experiencing an extended period of relative peace. The fact that this is happening while Christianity has become weak demonstrates that religion is not a pre-requisite for peace. A return to strong, sectarian religious power can be expected to bring with it renewed social conflict, together with intolerance and injustice."

In the letter, Ms in 't Veld warns:

"Dialogue that is organised exclusively on the basis of organised life stance, by its nature excludes the convictions and beliefs of those millions of European citizens who happen not to be member of an association or community."

The letter also urges the Bureau to ensure that the representative responsible for relations with churches and secular organisations is able to represent all views. It states:

"Recent public statements by Members of the leadership of this House suggest that they are personally opposed to the separation of church and state, and they do not feel public bodies such as the EU institutions should be secular in nature. They consider Christianity should be a determinant factor in our political work. Such views are a violation of the freedom of religion and belief, and an affront to millions of non-religious Europeans or indeed many Christians who believe public bodies should be neutral, secular in nature."

The post is currently held by Vice President László Tőkés, who is also a bishop of the Reformed Church of Romania.

In November 2011 Sophie in 't Veld MEP, walked out near the start of a meeting at the European Parliament to discuss Article 17 dialogue saying that it was biased against secularists and others who had no religious faith. The meeting was initially chaired by MEP/bishop Tőkés while awaiting President Buzek who had been delayed. When he arrived, Keith Porteous Wood left him in no doubt about the strength of dissatisfaction that had been expressed about the religious bias of the dialogue.