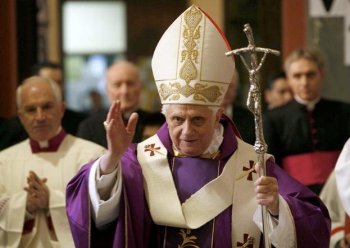 The pope has again railed against what he sees as the dangers posed by "radical secularism".

At a meeting with US bishops he also said that they should defend their right to interfere in politics.

The Pope said that while he supported the principle of separation of church and state, he still thought the Catholic Church had a right to intervene when it thought necessary. The bishops should apply pressure on US politicians to promote Catholic doctrine, particularly the curtailment of abortion rights.

He said: "The Church has a critical role to play in countering cultural currents which, on the basis of an extreme individualism, seek to promote notions of freedom detached from moral truth."

He noted US bishops' efforts "to maintain contacts with Catholics involved in political life and to help them understand their personal responsibility to offer public witness to their faith...".That was especially important with regard to "the great moral issues of our time: respect for God's gift of life, the protection of human dignity and the promotion of authentic human rights," he said.

The bishops had to ensure that American Catholics had the courage "to counter a reductive secularism which would delegitimize the Church's participation in public debate about the issues which are determining the future of American society."

Terry Sanderson, president of the National Secular Society, said: "Dressed up in this fancy language are some really dangerous ideas. The pope, underneath all the flim-flam, is promoting theocracy in the United States. He says he supports separation of church and state – except when it doesn't suit him. He says his bishops should, in effect, twist the arms of Catholic politicians into promoting church dogma. And this weaselly concept of 'authentic human rights' (that is, human rights as defined by him), would inevitably remove real human rights from great swathes of the population.

"We know that the Vatican does not approve of human rights for homosexuals, it believes in only limited human rights for women. Its doctrines in relation to contraception, abortion, stem cell research, assisted dying, condoms in the fight against AIDS and other issues are cruel and inhumane.

"He talks of 'radical secularism' and by applying this adjective 'radical' he thinks he then has the right to define what authentic secularism is. But his idea of secularism consists of privileges for the Catholic Church and disadvantage for just about everyone else.

"Such regressive thinking must be resisted."