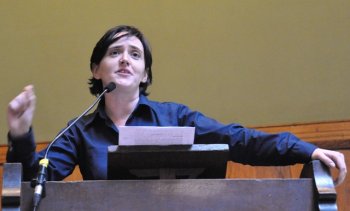 A talk on sharia and human rights by NSS Council Member Anne Marie Waters' at Queen Mary University of London was cancelled at the last moment because of an Islamist who made serious threats against everyone there.

Ms Waters was due to give a talk on behalf of the One Law for All campaign on 16 January but before it started, a man entered the lecture theatre, stood at the front with a camera and filmed the audience. He then said that he knew who everyone was, where they lived and if he heard anything negative about the Prophet, he would track them down.

The man also filmed students in the foyer and threatened to murder them and their families. On leaving the building, he joined a large group of men, apparently there to support him. Students were told by security to stay in the lecture theatre for their own safety.

The President of Queen Mary's Atheism, Secularism and Humanism Society, who organised the event said: "This event was supposed to be an opportunity for people of different religions and perspectives to debate, at a university that is supposed to be a beacon of free speech and debate.

"Only two complaints had been made to the Union prior to the event, and the majority of the Muslim students at the event were incredibly supportive of it going ahead. These threats were an aggressive assault on freedom of speech and the fact that they led to the cancellation of our talk was severely disappointing for all of the religious and non-religious students in the room who wanted to engage in debate."

The police were contacted about the incident.

You can read Anne Marie Waters' account of the event here.

In yet another instance of Islamic bullying and threats, skeptical blogger Rhys Morgan decided to show solidarity with the University College London Atheist, Secularist and Humanist Society after the controversy it endured after posting a Jesus and Mo cartoon on its Facebook page.

Rhys posted the image on his own blog and was immediately bombarded with threats, menaces and abuse from Islamists who aimed the usual accusations of racism and Islamophobia at him.

Rhys has remained defiant and reasoned in the face of this avalanche of bile and ignorance and the NSS offers its full support to him.