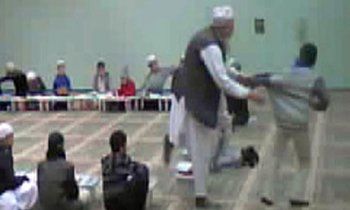 Children & Families Minister Tim Loughton MP has said that he is not convinced there is any need to regulate Britain's madrassas, despite clear evidence of abuse.

The Minister was responding to concerns expressed by the National Secular Society about child protection in Islamic schools. This followed a BBC investigation which revealed that over 400 allegations of physical abuse (and 30 of sexual abuse) were made at Britain's madrassas in the last three years. Only 10 cases went to court, and of these only two apparently led to convictions.

A senior prosecutor has suggested that these figures were likely to represent only the 'tip of an iceberg'. Nazir Afzal, the chief crown prosecutor for the North West of England, has commented that the figures represent "a significant underestimate".

UK madrassas are attended by more than 250,000 children from Muslim backgrounds every day for lessons on the Quran and Islamic culture.

In a letter to the Society, Mr Loughton said he was not convinced that it would be practicable for Government to implement a national register of madrassas and that any consideration of this would have to include all supplementary schools. To focus only on madrassas would appear discriminatory and could reinforce unhelpful stereotypes. Mr Loughton added "We would want any measures to improve safeguarding in out-of-school provision to be proportionate and not impose additional burdens on the sector as a whole."

The National Secular Society also called on Mr Loughton to implement without delay recommendations made by an official report (accepted by the previous Government in 2010) to extend the ban on physical punishment in schools and other children's settings to supplementary schools, including madrassas. At present, corporal punishment is legal in religious settings, so long as it does not exceed "reasonable chastisement". Mr Loughton has told the National Secular Society that the Government is considering the report's recommendations.

Dr Ghayasuddin Siddiqui is the founder of the Muslim Institute think-tank and he has long campaigned against child abuse within faith-based environments. He has voiced concerns that large numbers of unregulated organisations are opening madrassas across the country - most in mosques but some in garages, abandoned pubs or private homes. He argues that abuse is far too common; "Some kind of system must be put in place to ensure that only teaching takes place there, not sexual or physical abuse."

However, Mohammad Shahid Raza, chairman of the Mosques and Imams National Advisory Board, which was set up to improve standards in mosques, has said he would prefer the issue dealt with through self-regulation.

Stephen Evans of the National Secular Society, said: "It is clear that the current legal situation leaves children without sufficient protection in madrassas. The warning signs are clear that a soft-touch approach to this issue will only serve to facilitate widespread abuse of children within the Islamic tradition in the UK. There is understandably some reluctance within the community to voice their concerns over child protection. It is therefore important that the Government resists calls for self-regulation and tightens the law in this area to provide the necessary protection for vulnerable children."

The National Secular Society also expressed concerns over the lack of criminal record checks (CRBs) in madrassas. Under current regulations, madrassas and other supplementary schools are encouraged, but not required, to have CRB checks for all their staff members. A recent survey of madrassas revealed that 11 per cent of respondents did not undertake CRB checks on any of their staff. The Government say this loophole will be closing as new legislation (subject to Parliamentary approval of the Protection of Freedoms Bill) will soon require organisations to check that any adult they take on to look after children unsupervised is not barred from working with children.

Listen again: File on 4 – Are children at risk of abuse in Britain's unregulated madrassa schools?