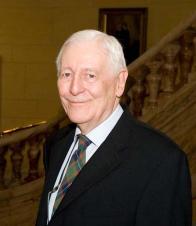 Lord Avebury was born Eric Lubbock and was the fourth baron Avebury. He became liberal MP for Orpington in 1962 and is perhaps best known for his celebrated by-election victory there where he achieved a 22% swing from the Conservatives. He became the fourth Baron Avebury in 1971 on the death of his cousin. In 1999 he was re-elected by his fellow liberal democrat peers to remain when most hereditary peers were removed. For some years before his death he was the longest serving LibDem peer. His fifty years as a Member of Parliament was celebrated by a reception given in his honour by John Bercow, MP, the Commons' Speaker, and attended by his many friends in Parliament of all political hues.

He supported countless human rights campaigns and formed the first human rights committee in Parliament. His knowledge of foreign affairs, particularly of remote parts of the developing world, was second to none. The weak and oppressed in these places have lost a true champion.

He was a most valued Honorary Associate of the NSS who worked tirelessly with us for many years. Of the many campaigns we worked on together, one of the most notable was the abolition of the blasphemy laws. In 2009 Lord Avebury was awarded (with Dr Evan Harris MP) the National Secular Society's Secularist of the Year Award in recognition of his role in the abolition of the common law offence of blasphemous libel in 2008. This had been proposed in the Commons by Dr Evan Harris but the Government could not contemplate the embarrassment this would cause the Church if he succeeded, so offered to support it in the Lords after a very nominal consultation.

He also campaigned for yearsagainst the injustice of caste discrimination, putting down an amendment in 2013 to require anti-discrimination legislation in a major Government bill that was running out of time. He felt so strongly, he defied Parliamentary convention by rejecting the elected House's (the Commons') reversal of his amendment and the Government had to concede. Sadly they have still not implemented Parliament's expressed will.

He worked tirelessly on removing mandatory daily Collective Worship in all maintained schools, causing such consternation with the bishops they sought assurances from the then education secretary Michael Gove that he would not permit this. Speaking in a Parliamentary debate in 2011 after an amendment to abolish the collective worship requirement had failed, Lord Avebury said: "Sooner or later we shall get rid of the act of compulsory worship in schools, and the sooner the better."

More unfinished business is Chancel Repairs Liability under which even those who have never set foot in their local Anglican church can be responsible for its repair by virtue of owning a piece of land, however small, to which this mediaeval obligation attaches. A private member's bill to abolish it, introduced by Lord Avebury with the assistance of the NSS, is slated for its second reading shortly. Lord Carlile of Berriew QC has kindly agreed to take this forward.

Keith Porteous Wood, NSS executive director and a close friend of Lord Avebury, commented: "He was so charming and knowledgeable, working with him – as we did for well over ten years – was such a pleasure. He certainly helped the NSS hugely and I got the impression he thought that our assisting him over that period had enriched the end of his career. And what a distinguished one it was. I have been moved by the number of politicians who have approached me as it has become clear that he was dying, to say that they thought he was one of the most effective peers of his time. Fellow LibDem Lord Lester of Herne Hill QC, who has devoted his life to Human Rights, described him as " A great man and friend." Eric however was always characteristically modest about his own achievements while being generous about those of others.

"He was always disarmingly frank and pragmatic about his death and he told me once that a consultant he told him how long he had left to live. He took the prediction very literally and precisely; he laughed when I suggested wryly that he was treating it just like an appointment. He was an enthusiastic supporter of Voluntary Euthanasia.

He was proud of his ancestors , observing that many (I think it was more than ten) had met their ends by being executed – generally for having fallen foul of the monarch or ended up on the losing side. It made me wonder if speaking truth unto power ran in the blood."He certainly comes from a great lineage. The first baron Avebury was a polymath, a successful banker and the most successful lawmaker of his time. He was a neighbour of Charles Darwin and one of his closest friends. He was responsible for introducing Bank Holidays, creating the cheque clearing system, the Shop Hours Act, Open Spaces Act, Public Libraries Act, the Ancient Monuments Act, which paved the way for the creation of English Heritage. He bought the stone age circle in Avebury, Wiltshire to save it for the nation - from jobbing builders who were about to destroy it.

"I have lost a very close friend, the nation has lost a Human Rights champion. Our condolences to Lindsay his wife, and all his family."