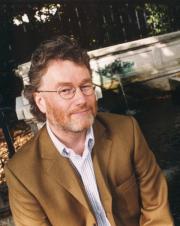 Iain Banks was a best-selling novelist and science fiction writer. As Iain Banks, his novels include The Wasp Factory and Espedair Street, which was adapted for BBC radio in 1998. Much of his science fiction, written as Iain M Banks, deals with a large pan-galactic civilisation, The Culture, which he described as a sort of 'secular heaven'. His most recent book was Transition and his last book as Iain M Banks was The Hydrogen Sonata. His last novel, The Quarry, was due to be published in June 2013.

Iain Banks was also a committed atheist and made a guest appearance, as an extra, in Monty Python and the Holy Grail.

In 2008 he was included the the Times' list of the 50 greatest post-war writers and in 2009 he was short-listed for the Prometheus Award.

"The Universe says simply, but with every possible complication, 'Existence' and it neither pressures us nor draws us out, except as we allow. It all boils down to nothing, and where we have the means and will to fix our reference within that flux, then there we are. Let me be part of that outrageous chaos... and I am."