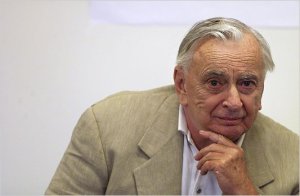 Gore Vidal (1925 – 2012) was a well-known American novelist, essayist, dramatist and political activist. Vidal, a self-proclaimed born-again atheist, wrote on political, historical, and literary themes. Much of his essay work is collected in the volumes United States and The Last Empire.

Once people get hung up on theology, they've lost sanity forever. More people have been killed in the name of Jesus Christ than any other name in the history of the world." "Ultimately, totalitarianism is the only sort of politics that can truly serve the sky-god's purpose. Any movement of a liberal nature endangers his authority and that of his delegates on earth. One God, one King, one Pope, one master in the factory, one father-leader in the family at home." "I regard monotheism as the greatest disaster ever to befall the human race. I see no good in Judaism, Christianity, or Islam -- good people, yes, but any religion based on a single, well, frenzied and virulent god, is not as useful to the human race as, say, Confucianism, which is not a religion but an ethical and educational system.