On 15 July 1866, The National Reformer announced plans 'to place the Secularists of Great Britain who, during the past few years have enormously increased in numerical strength, in more intimate communication with each other'. Bradlaugh's objectives were always political and were initially closely related to the radicals' attempts to broaden the franchise.

On 9 September Bradlaugh used the columns of his newspaper to proclaim the programme and principles of a new National Secular Society with him as temporary President pending a national conference. This eventually occurred in Bradford in November 1867 when Bradlaugh's presidency was confirmed.

Bradlaugh now had the backing of a network of loyalists and a national organisation to support him in the great struggles that were to follow.

Bradlaugh was helped by his close friend and colleague Annie Besant – a pioneering feminist – and hundreds of active supporters. His new national society emerged to play an important part in British politics. The NSS stood against religious privilege and demanded a secularised society, including an end to all political support for religious purposes and especially the disestablishment of the Church of England. Bradlaugh was a passionate republican who sought to bring about far-reaching changes by strictly constitutional means. This side of his work gave the secular movement a central position in English radical activity during the lean years of working-class history following the collapse of Chartism.

Bradlaugh's early struggles and his political and social work taught him the need for freedom of speech and publication. He was also a convinced neo-Malthusian who believed that grinding poverty could only be relieved if families were smaller. In 1877, when he and Annie Besant republished a pamphlet explaining contraceptive techniques, The Fruits of Philosophy, they were prosecuted and convicted. The two were arrested, tried and sentenced to six months' gaol, but appealed and won on a legal technicality. Although the trial divided secularists, it represented a crucial victory in the battle for free speech and a free press. The years after 1877 also saw a marked decline in the birth rate in the UK. 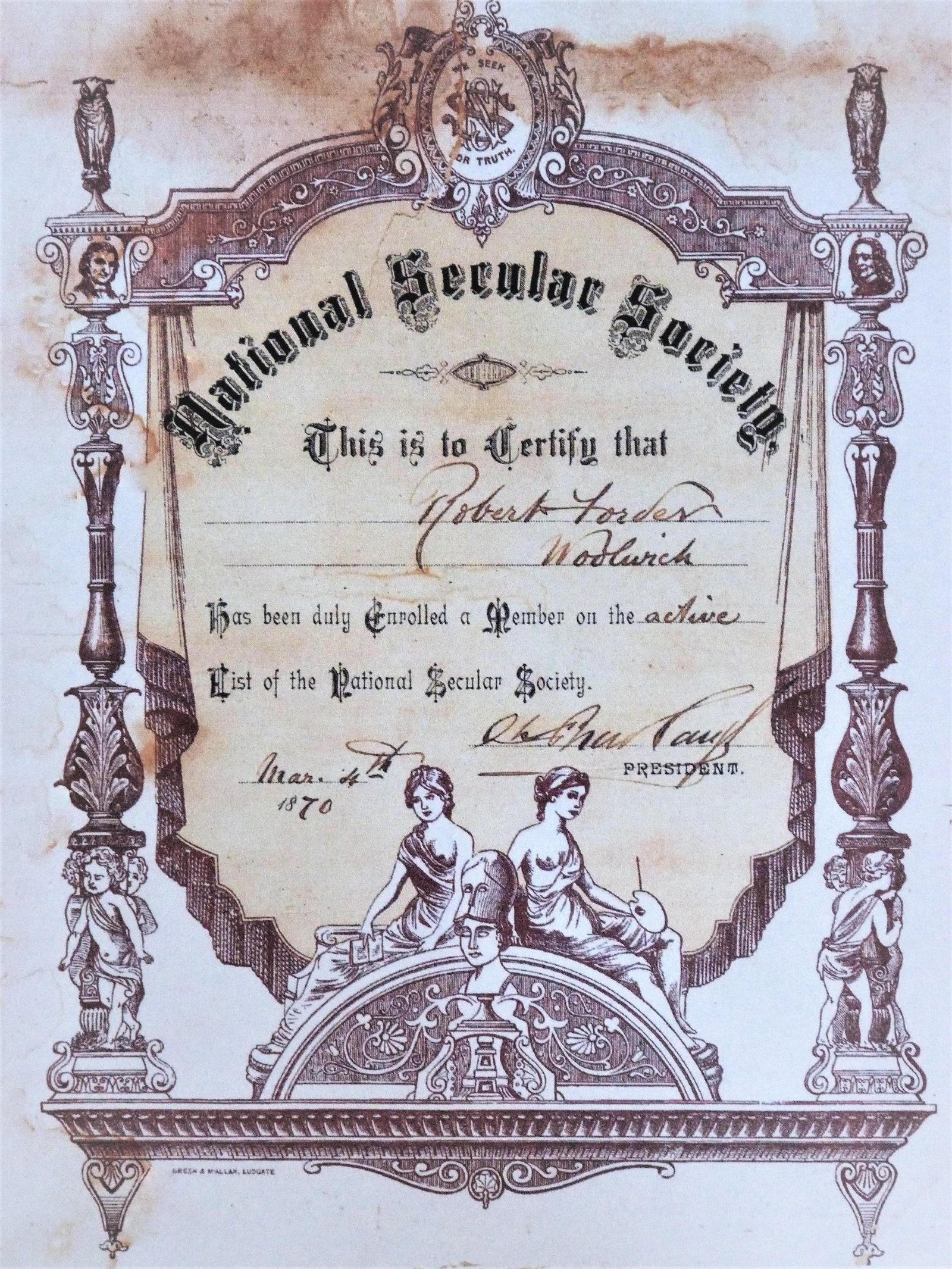 An early NSS membership certificate of the man who was to become the Society's first full-time paid secretary. Note the legend "We Seek for Truth" at the top and the portraits of Thomas Paine (top left) and Voltaire (top right)

Even apart from the founding of the NSS, 1866 was a significant year in the history of radical British politics, seeing the foundation of the Howard League and the Fawcett Society. Together these three are the oldest radical campaigning organisations in the UK, with a continuous history since their foundation.