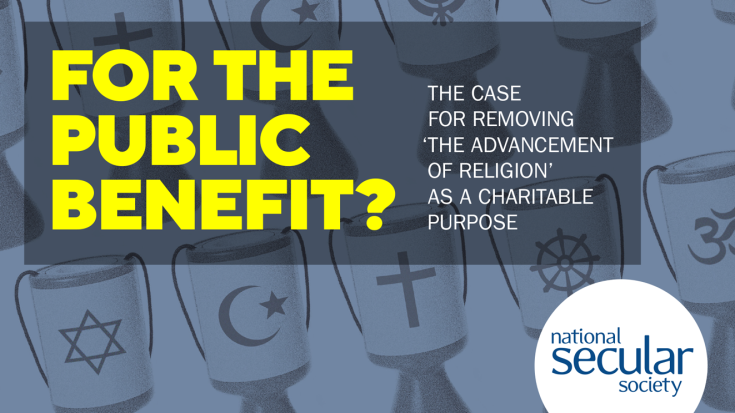 Our report – For The Public Benefit? – argues that "the advancement of religion" should be removed as a charitable purpose, on the grounds that promoting religion is not inherently a public benefit and can sometimes even cause harm to society.

This measure would not prevent religious organisations from enjoying charitable status, but would require them to demonstrate a tangible public benefit under another charitable purpose heading.

Recommendations for a fairer and clearer charity system:

2. End abuse and harm
There should be far greater scrutiny and an end to religious charities that cause greater harm than good – there is abundant evidence that this still persists.

4. An emphasis on supporting communities
Charity sector policy should emphasise supporting charities, both religious and non-religious, which deliver tangible outcomes for communities

5. Effective use of taxpayer money
The charity sector must ensure it uses public money to deliver genuine benefits to individuals and wider society.

6. Align charity law with public opinion
Current charity law - and the continuation of 'the advancement of religion' as a charitable purpose - is increasingly out of line with UK public opinion and should be reformed to better reflect this.

Tell your MP it's time for "the advancement of religion" to be removed as a charitable purpose. Enter your postcode below to find your MP and send a letter to them.