In 2008, the blasphemy laws were finally abolished. The culmination of 140 years of NSS campaigning provided an excuse for its 'Bye Bye Blasphemy' party! The historic change followed a letter written to The Daily Telegraph by Dr Evan Harris MP and the NSS, and was signed by several major figures, including senior leaders of the Church of England. 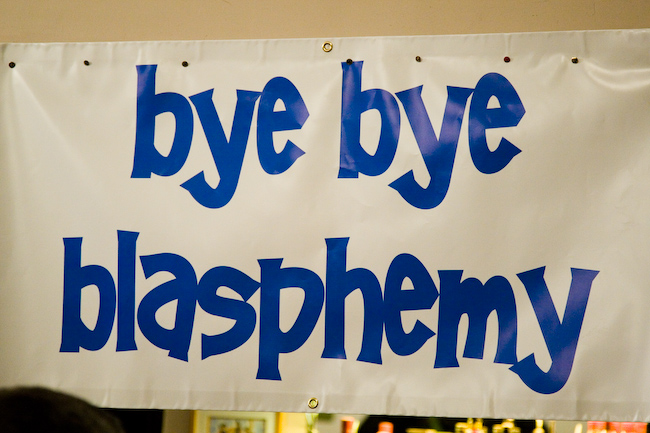 After an acrimonious debate in which the bogeyman of secularism was repeatedly invoked, the House of Lords on Wednesday accepted the amendment to the Criminal Justice and Immigration Bill that abolishes the common law of blasphemy and blasphemous libel.

The amendment had originally been introduced by Lib Dem MP Dr Evan Harris in the House of Commons, but the Government had persuaded him to withdraw it after promising to introduce its own amendment later in the Lords. This it has now done, although — if Baroness Andrews' speech was anything to go by — with something less than enthusiasm.

The Bishops in the House were divided, some saying that the abolition was unnecessary and undesirable and others saying that it was inevitable and that the Church should therefore concede. The Archbishop of York, John Sentamu, had agreed to the Government's amendment during a consultation, but expressed strong reservations about the timing of the move.

Prominent Christian activist Baroness O'Cathain launched a blistering attack on the amendment, with particular fury aimed at Evan Harris. Lady O'Cathain maintained that abolition of blasphemy would unleash a torrent of abuse towards Christians.

Lib Dem peer Lord Avebury pressurised the Government into keeping its word by tabling his own abolition amendment.

The Government had conducted a "short and sharp" consultation with the Church of England about the amendment, and the Archbishops of Canterbury and York both agreed not to oppose the abolition, although both questioned its timing.

Evan Harris said that this debate had been going on for 21 years, since the Law Commission had recommended abolition of the law, and for the Church it would never be the right time.
Lord Avebury also introduced other amendments to the Bill that would clear out some other ancient Church privileges, such as Section 2 of the Ecclesiastical Courts Jurisdiction Act of 1860, under which Peter Tatchell was charged when he interrupted a sermon by the-then Archbishop of Canterbury in Canterbury Cathedral. Lord Avebury's amendments were rejected by the Government and opposed by the bishops.

Keith Porteous Wood, Executive Director of the National Secular Society, attended the debate and welcomed the Lords decision. He said: "The National Secular Society has been campaigning to abolish the blasphemy laws for 140 years. They have an iniquitous history of persecution, and because it is a common law offence with no limit on punishment, they have resulted in executions and imprisonments with hard labour for people who wrote and said things that would, in the modern day, be considered trivial. It is disgraceful that such a relic of religious savagery has survived into the 21st century."

Mr Porteous Wood pointed out that although the UK blasphemy laws are in the course of abolition, there is growing pressure in the Islamic world to outlaw so-called "religious defamation", a kind of super blasphemy law. This pressure is being applied at the United Nations and its Human Rights Council. He commented: "If the United Nations Human Rights Council succumbs to the pressure from the Islamic countries to permit laws against religious defamation, it will be a major blow to freedom of expression, which underpins both democracy and civilisation itself. Nations who cherish freedom should wake up to the dangers of such moves, rather than sit idly by as they have done so far."

Coincidentally, on the day before the debate, the House of Lords' Appeal Committee rejected the petition in the Jerry Springer case from Stephen Green, the director of Christian Voice, who brought a private prosecution, and whose request for judicial review the High Court was turned down in December. "Christians will now have to take matters into their own hands when Christ is insulted on stage and on screen," Mr Green threatened on Monday. He described the Lords' decision as "a blatant, shameless political manoeuvre by a God-defying élite". He said: "If this is to remain a Christian country, with the Archbishop of Canterbury crowning the future king, Parliament needs to legislate quickly to protect the honour of Jesus Christ."

Read the whole of the debate on this historic step from the Parliament website
starting at column 118, the most significant speeches are:
For: Minister (Baroness Andrews) Col 1118; Lord Avebury Col 1123; Bishop of Portsmouth Col 1132;
Yes, but: Archbishop of York Col 1127
Against: Baroness O'Cathain Col 1129

And a thorough examination of events at Heresy Corner